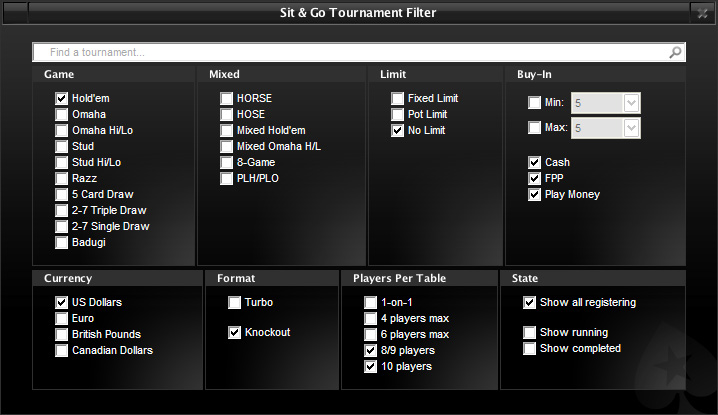 It’s mid-2008. PokerStars is well-known for its wide selection of tournaments. In fact, there are now thousands of different tournaments every single day, and it is becoming difficult to easily find the ones that interest you in amongst the rabble of tournaments that don’t. The simplest way to find the week’s flagship event is to scroll through the list of ‘Special’ tournaments, looking out for an entry with the name ‘Sunday Million’.

At the time, PokerStars already had a basic filtering system in place so that users could hide specific games they weren’t interested in. For example, to hide Omaha games the user could uncheck the box marked ‘Omaha’, and users could check another box so that only tournaments that were currently registering or upcoming were shown. But with thousands of upcoming tournaments at any one time, this was of limited use.

While designing the upgraded filter, I made obvious improvements such as allowing the user to filter out specific game formats that didn’t interest them (like Turbo tournaments), and some less obvious ones like preventing the player from being able to enter filtering combinations which would have always returned no results. But possibly the biggest lightbulb moment came as a result of playing around with Windows Vista’s search feature.

In Windows Vista, the start menu has an integrated search function. You can open the start menu and start typing, and results are shown in real time as you press each key. Microsoft has improved this further in Windows 7 and 8, to the point where you can now open a program or file with as little as three key strokes (for example, opening Word is as simple as pressing the Windows key, followed by ‘W’ and then Enter).

Many tournaments on PokerStars, including all of the flagship events, have names. I realised that with a similar type of search mechanism to Windows Vista, you could find a specific tournament like the Sunday Million with trivial ease. All you’d have to do is start typing the word ‘Sunday’, and voilà, there was your tournament. With the addition of a boolean NOT to remove keywords that you were not interested in, this became a very powerful feature.